A Guide on how to interpret Aurora Forecasts

Most aurora forecasts are based on the so called Kp-index. The Kp-index measures how solar activity disturbs the magnetic field of the earth (Siebert, 1971). It is measured every 3 hours and takes on values between 0 and 9, with 9 being the highest level of disturbance. The higher the level of disturbances takes on the higher is the chance of visibility and the higher is the intensity of aurora. Therefore, the different aurora forecasts publish the Kp-index for different regions. It is important to note that already a Kp-index of 2 can mean that aurora can bee seen. However, most of the time a value higher than 3 means visibility. Nevertheless, one should not forget to also check the clouds forecasts, since clouds disturb the visibility of aurora. Therefore, pages like the Iceland Met Office also publish forecasts on the level of cloudiness in addition to the Kp-index. On their graphs white areas are areas without clouds and the darker the green the cloudier is the area. In addition information on the times of sunset and sunrise which is given next to the Kp-index is helpful when planning to go on aurora hunt.

The following picture shows an example of such an aurora forecast: 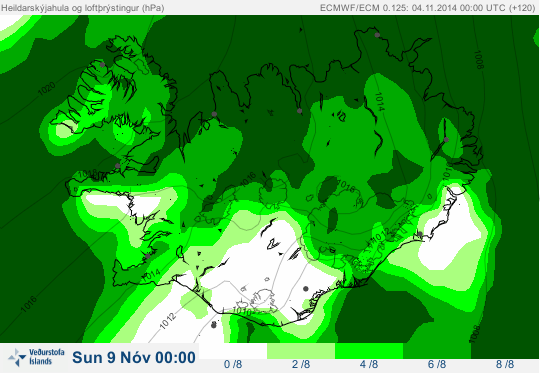 On the example above the aurora level of 3 (which is based on the Kp-Index) means that in theory aurora can be seen in Iceland. However, as said before one also has to take into consideration how cloudy it is. In the Reykjavik area there is a cloud cover index of 4 out of 8 which will most likely affect the visibility of Northern Lights. In the southern part of Iceland on the other hand there are no clouds and hence one can probably see Northern Lights there. Important to notice is that on many places along the ring road Nr 1 there are clouds. This shows that joining  a Northern Light tour in a super jeep has its advantages compared to tours in busses. It is much easier for a super jeep to leave the main roads and get away form the clouds compared to a bus.

As stated by the Sodankyla Geophysical Observatory in Finland the fact that the sun rotates around its own axis within a period of 27 days and since sunspots can stay for many months it might be helpful to investigate the auroa activity that occurred 27 days before.

Please note that all these forecast methods are not fully reliable. Our guides use there are own personal experiences in addition to these forecast. Some people just have a sixth sense for hunting aurora. You can read an interview with a professional aurora hunter here.