What are Northern Lights 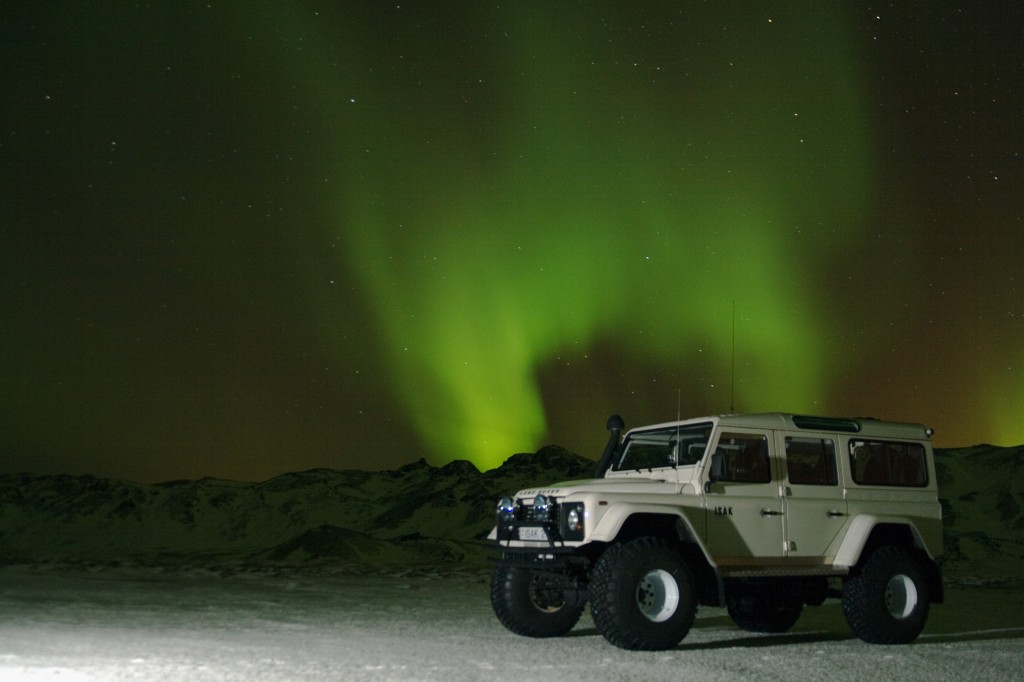 Flickering curtains of green, red, yellow or blue color dancing on the night sky. Most people that ever had the luck to experience Northern Lights will agree that this show performed by mother nature is simply breathtaking. Northern Lights are definitely one of the most spectacular light show on earth that is created by nature. They are indeed an elusive, magical phenomenon. When you for the first time see them dancing around the entire sky above you and change shapes and colors within a short time period, you will understand what we talk about.
Although they can possibly occur at any time of the day, Northern Lights are usually seen at night when darkness occurs. It has been said that the lights can be so bright that one is able to read a newspaper underneath them during the night. The best time of the year to see them is between late fall and early spring. However, since nature is not always predictable it is not possible to make forecasts on aurora activity (click here to learn more about aurora forecasts).

The scientific name for Northern Lights is Aurora Borealis. The name Aurora Borealis is Latin and can be translated into “the dawn of the north”. Aurora was a Roman goddess of dawn and Boreas is Greek for the north wind. During the 13th century Norwegians used the name “Northern Lights” for the first time. In the following both names – aurora and Northern Lights- are used.

Since Northern Lights are such a magical phenomenon it is not a surprise that there exists a tremendous amount of stories and legends about them. People through different time periods have explained the lights as among other things a sign from dead women, light from gods’ kingdoms, something evil and dancing spirits (read more on this topic here). Early documentation of Northern Lights can already be found during the Stone Age. Carvings displaying Northern Lights have been found in a cave, which is located in today’s France. However, the question on what causes them was long unanswered.

Attempts to explain the Northern Lights continued to change over time and it wasn’t until the end of the 19th century that someone succeeded. Kristian Birkelund, who was a Norwegian scientist finally found the correct explanation for this phenomenon. His theories were based on many expeditions in Norway and on the photographs he took of Northern Lights during these expeditions. He was actually the first one to capture Northern Lights on photographs. A short sum up of his explanation can be found in the Section How do they form. Aurora are not only visible on earth, but also on a handful of other planets such as Jupiter. Moreover, there is a lively discussion whether Northern Lights have their own sounds or not. However, until this day this discussion is not settled yet.

How do they form?

In short, aurora are created by the collision of electrons originating from the sun with different gases in the atmosphere of the earth. This collision causes light to be released which we then see as aurora.

In a bit more detail, auroras are caused by solar activity and the way it interacts with the magnetic field that surrounds our planet. In addition to this the gases oxygen and nitrogen that can be found in the atmosphere of the earth play a role. Solar particles (electrons and protons) originating from the sun travel continously to the earth  and hit the magnetic field of the earth. Due to magnetic forces these solar particles are guided along the protective shell of the earth. As a result of this process the particles reach two ring shaped regions which are referred to as the Auroral Ovals. One of them is located close to the North Pole and the other one close to the South Pole (see picture below). For different solar activity the size of those regions vary. The greater the activity the greater is the area. An Illustration of the current Aurora Ovals can be found here.

During cycles of increased solar wind activity, which are referred to as Solar Flares and which are caused by a higher amount of sunspots, enlarged numbers of particles travel between the sun and the earth. When they hit our magnetic shield they somewhat change the form of it. The Magnetopause which normally prevents the solar particles to enter the earth’s atmosphere “breaks”. As a result of this a number of charged particles enter the atmosphere of the earth at the Auroral Ovals and interact with gases – namely oxygen and nitrogen. During the process of calming down after being excited by the sun particles, light is produced by the molecules of the gases. If a large enough number of collisions occurs, this light is visible as aurora for us. The whole process is visualized in the graphic below.

Aurora are in fact a proof that particles do move aside the magnetic field of our planet.

Note: this is a simplified explanation of the whole process. For a more scientific explanation the following video is recommended:
http://www.youtube.com/watch?v=HJfy8acFaOg#t=0

The post on Wikipedia about Northern Lights is highly recommended if one searches for an easy to follow more extensive explanation of the formation of Northern Lights. 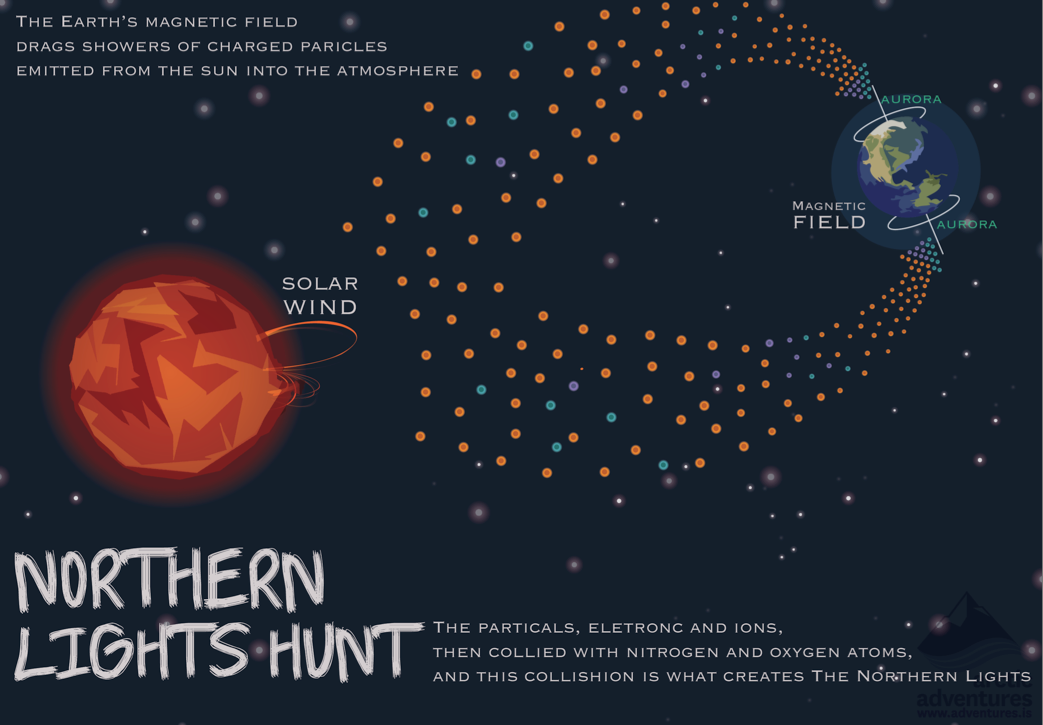 The different Colors of Northern Lights

The color the Northern Lights display can vary, although green is by far the most common color. The color they display depends on the type of gas that is involved in the process as well as the energy level the sun particles embody. While green, yellow and red colored aurora are associated with exited oxygen, blue and purplish colors are caused by interaction with nitrogen.

Whether a Northern Light is green or red depends on the altitudes at which the oxygen emits. For different altitudes the energy level the particles have varies. The higher the altitude is the higher is the energy level.If the collision occurs at a relatively higher altitude, the color of the Northern Light is red. For this a higher intensity of the activity of the solar wind is needed. On the other hand, green Northern Lights are created at lower altitudes and hence at lower energetic levels. Therefore, a lower degree of solar activity is needed to be present in order to create green northern lights.

The blue and the purple colored Northern Lights can been seen rather rarely. That is because Northern Lights need to go above the shadow of the earth and be directly exposed to the light of the sun to appear in these colors. In order for this to happen, the sun needs to be located in a certain position. The sun needs to be positioned slightly below the horizons in a so called deep twilight. A coloring of this style is referred to as “resonance scattering” and can also happen when the light of the sun is reflected by the moon.

Yellow Northern Lights are caused by a combination of the different other colors. 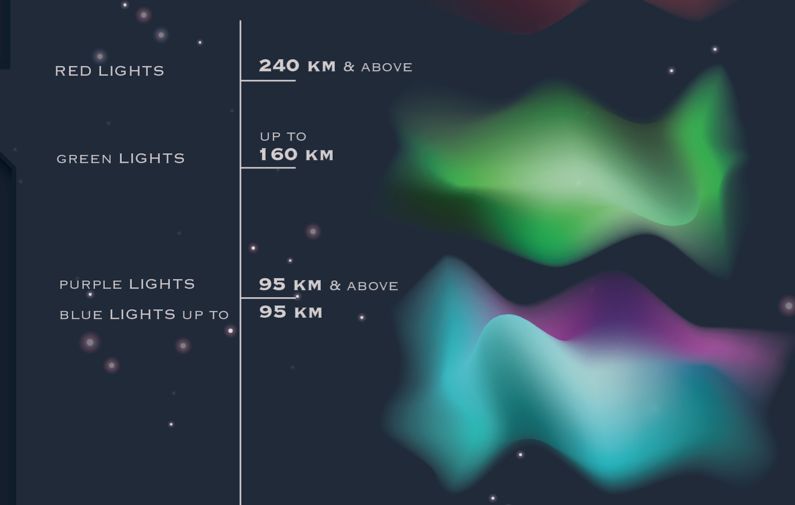 The different shapes of Northern Lights

The aurora can appear in many forms. The basic forms are: Arcs, Corona, Diffuse, and Drapery. Drapery is the shape that is seen most often. Drapery aurora are commonly described as flickering curtains. Arcs have a shape that remain us of a rainbow, while Corona is seen in the shape of  a crown. Diffuse aurora are only seen on rare occasions and do not take on a shape with specific features. Moreover, they cannot be easily seen without the help of certain devices. These different basic shapes are illustrated in the graphic below.

Scientists have not yet found an exact answer to the question of what causes these different shapes. It is for example believed that the shapes depend on the electrons’ source and the way these electrons incident into our atmosphere. This process varies due to the fact that the magnetic field of the earth is responding in an ever-changing way to the particles originating from the sun. Moreover, the relative position between the Northern Lights and the person observing plays a role in determining the shape of the Northern Light that can be seen.

The Southern Lights or Aurora Australis are created in exactly the same way as the Aurora Borealis, but the difference is that they occur close to the South Pole at the other Aurora Oval. All the previous given information is also true for them as well.